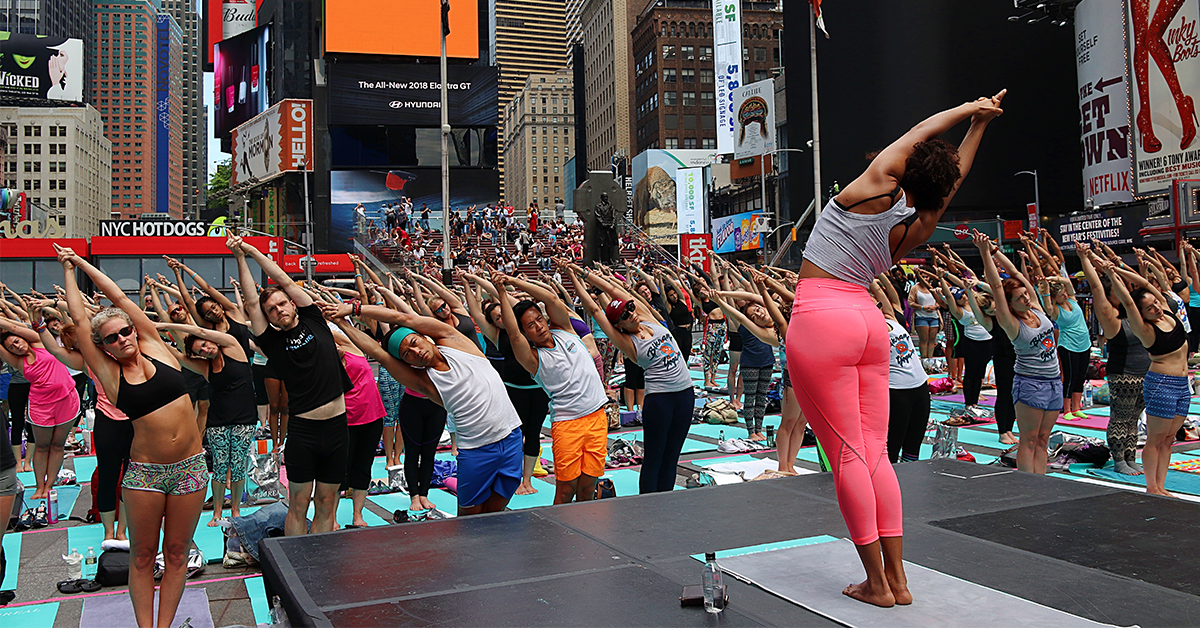 “International Yoga Day, it’s finally here!” you say aloud, grinning ear to ear. You cross off the 21st of June in a bright red marker on your calendar and bound out the kitchen door to start your day.

As a yoga lover you can’t wait to spend the day celebrating with your friends, getting a sweat on over at the studio or performing some Sun Salutations in the local park (Hey, it’s also the summer solstice too don’t forget).

You are alway amazed by how much International Yoga Day grows every year. It’s an opportunity to make new friends, catch up with old ones and spread the joys and benefits of yoga to people everywhere.

The day is a true international celebration. With yoga classes, meetups and sessions happening globally and on a massive scale. Everyone enjoys the day a little differently and in this article we’ll be looking at how a few different cultures we’ve experienced at Yogalife spend this special day.

Why is there an International Yoga Day?

As the name suggests International Yoga Day is a global celebration of yoga that happens on the 21st of June. This date was chosen as it’s the summer solstice and the longest day of the year in most parts of the world.

The date was proposed by The United Nations General Assembly in 2014 and the first International Yoga Day happened the following year. It was decided there should be an international day for yoga to promote the positive impact it has on people’s physical and mental health.

The word yoga is derived from an ancient language called Sanskrit. In Sanskrit it is pronounced “Yuja” and the word means the uniting or unification of body and consciousness.

Translated into the modern age, the mental and physical benefits of yoga are beyond doubt and the more people that are exposed to this amazing activity the better.

How should you celebrate?

Everyone will have their own unique way of celebrating International Yoga Day. Some people will head over to their nearest studio for a morning session or read up on the philosophy of yoga.

Many people like to use it as an opportunity to introduce friends and family to yoga. They’ll spend an afternoon sharing their experience and stories from their time doing yoga (along with a few beginner poses) in the hopes they can spread that joy to other people.

At Yogalife we’ve been fortunate enough to run yoga retreats all over the world and during our travels we’ve seen how other cultures like to spend their International Yoga Day, how they celebrate it and what they like to do.

Our retreat in France was our first ever winter yoga retreat or “snowga” as we like to call it. When people think of yoga they tend to associate it with hot sunny beaches or tropical retreats.

We’ve actually found yoga has a lot in common with winter sports too. Both require dedication and passion, both teach you to be in tune with your body and both bring you closer to nature.

It’s no surprise then that keen yogi’s in the Alps like to spend their International Yoga Day enjoying a spot of Ashtangi on the mountain side in between runs. Combining skiing and yoga is a great way to take yoga to an unusual location and expose a new audience to yoga who might not have seen it before.

It’s a commonly known fact that it’s hot in Spain. Take our word for it, we run three retreats there (Barcelona, Majorca and Gran Canaria). And whilst it’s great to do some al fresco hot yoga sessions, the heat can get a bit extreme from time to time.

Spanish yogis are likely celebrating International Yoga Day with some early evening or late night yoga after their afternoon siesta to avoid the heat. Feeling fully recharged and ready to take on the evening is a great mental state to be in when doing yoga. You’re also more likely to get first time yogis up and having a go when it isn’t 35 degrees outside!

Greece – Yoga by the Aegean

Yoga is all about centering yourself and getting back to nature. Whether that’s in a desert, up a mountain, or in the case of Greece, listening to the crashing waves and ocean swell of the Aegean whilst doing yoga next to the sea.

Greece and the sea go hand in hand, our Greek retreat in Corfu isn’t far from the sea (nowhere in Greece is really) and you can be sure that Greek yogi’s will be grabbing there mats and heading to the cliffs and beaches on International Yoga Day to feel the sea breeze on their face and enjoy a session of yoga next to the ocean.

India – Yoga with a vegan meal

For many people yoga is more than just an exercise. It goes beyond an activity you do to keep fit and limber and becomes a way you live your life. Yoga originated in India and encompasses more than just physical exercise. Most Indian yogis will be eating a strict plant based diet and they’ll be celebrating International Yoga Day with a yoga session and a vegan meal.

If you’re not a vegan but would be interested in trying it for a day, International Yoga Day is a great opportunity to combine both and celebrate yoga wherever you are.

How will you celebrate?

The Yoga Sutras in context

You can choose any 3 od the following optional modules